Although Howard County may be the smallest county in Maryland, it ranks among the top 10 in number of horses and horse farms.

The county is home to the Maryland Horse Council, housed in an historic building in the village of Lisbon. Visitors are encouraged in drop in and pick up a copy of The Equiery, a monthly magazine published by the Council which prides itself as the number one source for horse information in the state. The Maryland Horse Council staff is happy to answer your equine-related questions as you enjoy your visit.

Also located in Lisbon is Days End Farm Horse Rescue, which is quickly gaining a national reputation as an education and hands-on center for equine welfare.

Both English and Western horse shows, lesson barns, foxchasing, steeplechasing and Thoroughbred racing and breeding farms are part of the county’s horse allure. In December, horseback riders mix with farmers on their tractors in The Great Lisbon Farmers Feed the Hungry Christmas Parade, which raises money for local food banks.

Howard County is steeped in horse history. It is the site of Doughoregan Manor, closed to the public, but famous for more than two centuries as the colonial home of the Carroll family.  Badger, the state’s top racehorse sire in the early 1800s, stood at stud there and in the past, the estate was a venue for the Thanksgiving Hunt and an annual horse show. 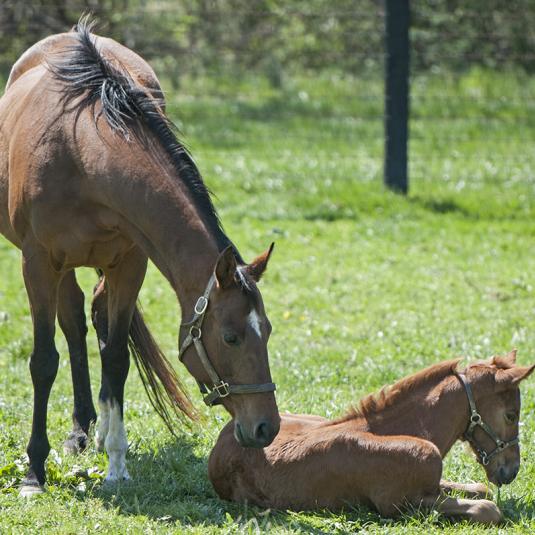 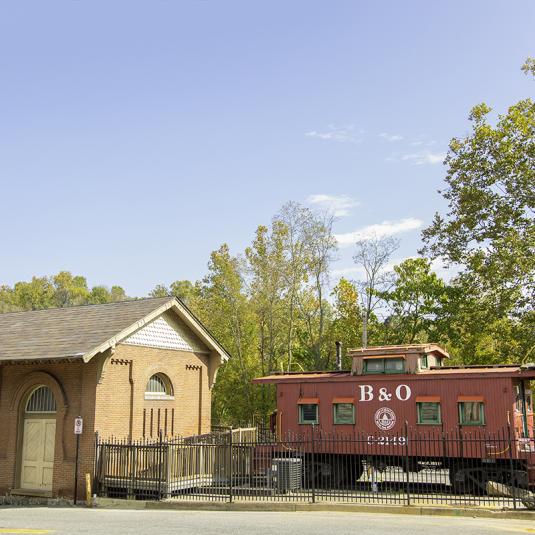 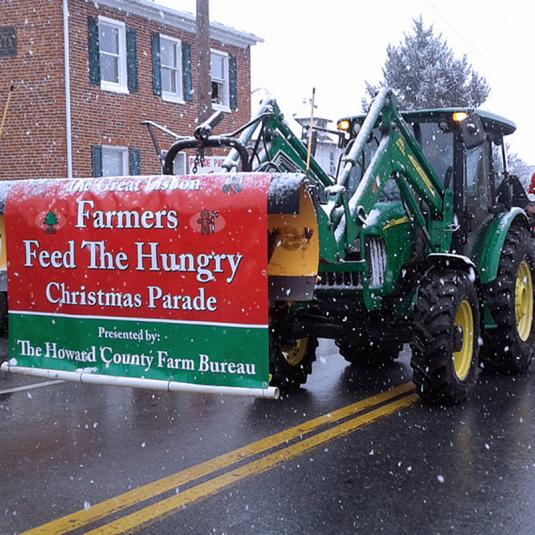 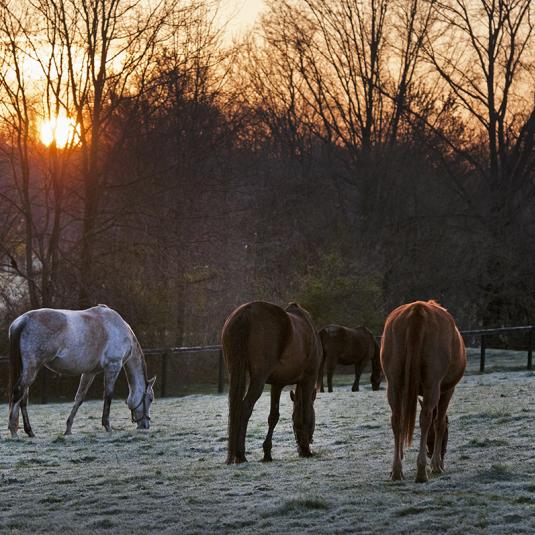 In Ellicott City, the B&O’s Ellicott City Station Museum celebrates the 1830 race between the  “Tom Thumb” Steam Engine and a horse. (According to legend, the race was won by the horse.) Overlooking the picturesque town is the Howard County Historical Society, headquartered in an old church donated to the society by Howard County’s grand dame of horsemanship, Alda Hopkins Clark. Mrs. Clark also helped found the Howard County foxhunting club. Her granddaughter, Martha Clark, currently runs a county landmark and petting farm on the family property. Pony rides, of course, are a main feature.

Currently, the hunt has moved further west and its annual steeplechase meet is run at Donald Reuwer’s Pleasant Prospect Farm near Brookeville.

There are also a few ghosts in Howard County’s past. The one remnant of Freestate Raceway, once Maryland’s leading harness racing track, is a lone figure of a horse and sulky at the entrance to the Lincoln Center shopping complex near Laurel. The gravesite of Billy Barton, one of the country’s most famous steeplechase horses of the 1920s, is located on the grounds of Belmont Manor and Historic Park, open to the public near Elkridge. Turf Valley Resort was once Pistorio Farm, at one time the state’s leading Thoroughbred farm. Nearby was Woodlawn Farm, home of the leading sire Prince Dare, now Columbia home sites.

Renowned today as one of Maryland’s most sought-after wedding and event venues, Belmont Manor was once a bustling horse farm. Belmont was also the original site of the Elkridge Hounds, one of the state’s oldest foxhunting clubs and home to Billy Barton, a rogue racehorse transformed into a famous steeplechaser owned by the farm’s owner, Howard Bruce. Billy Barton graced the cover of TIME Magazine in March of 1929. He had won the 1926 Maryland Hunt Cup and Virginia Gold Cup. In 1928, he was second in the English Grand National. In transit to England, it is said he had his own stateroom on a Cunard line ship. There is a statue of Billy Barton at Laurel Park. He is buried on the Belmont grounds.
More info...

The Ellicott City Station is the oldest surviving railroad depot in America, and one of the oldest in the world. The museum is an educational center concerning early railroading and honors the memory of Tom Thumb, the first American-built steam locomotive and its much-publicized race with a horse-drawn car in 1830. The race  is depicted in the museum and there is a dramatic rendering of the horse. There are several exhibits about horses and their role in pulling railroad cars. There is a horse-drawn railroad car on display.
More info...

The Howard County Historical Society is home to the county’s most complete collection of historical records and artifacts. The benefactress and founder, Alda Hopkins Clark, a great niece of Johns Hopkins, purchased the First Presbyterian Church in the historic district in 1958 and donated it to the society. Mrs. Clark was a renowned horsewoman, often riding sidesaddle in foxhunts. There is a portrait and some photographs of her in the museum. Her memoir, Hold Hard, is available for purchase from Clark’s Elioak Farm and there is an annual race named in her honor at the Howard County Cup Races.
More info...

The 540-acre farm, which is in farmland preservation, is situated adjacent to Columbia and near old town Ellicott City. It is an open space wonderland for families, offering a petting farm with a wide assortment of farm animals and interactive objects from the former Enchanted Forest storybook park. The farm offers educational and special event experiences., including pony rides and is designated a Maryland Horse Discovery Center. Ponies named Arlo, Taco, Picasso and Captain Jack have their own fan club. The farm, owned by Martha Anne Clark, the granddaughter of horsewoman Alda Hopkins Clark, was once home to a Thoroughbred breeding operation. Crops grown there are hay and vegetables. The farm is open to the public April 1 to November 7.
More info...

Now 75 years old, the Fair offers all sorts of agricultural shows and displays, including a horse show every day. There is a rodeo, a mule show, a draft horse show, 4-H riding shows and horse breed shows for horses and ponies. The Fair generally runs the second week of August. The fairgrounds is also home to the Maryland Western Horse Show Association and several horse shows are put on throughout the year. The fairgrounds is adjacent to the Howard County Living Farm Heritage Museum, which offers several miles of horseback riding trails.
More info... 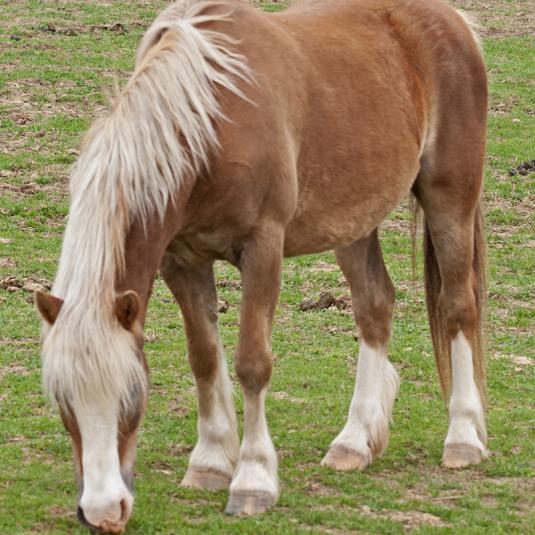 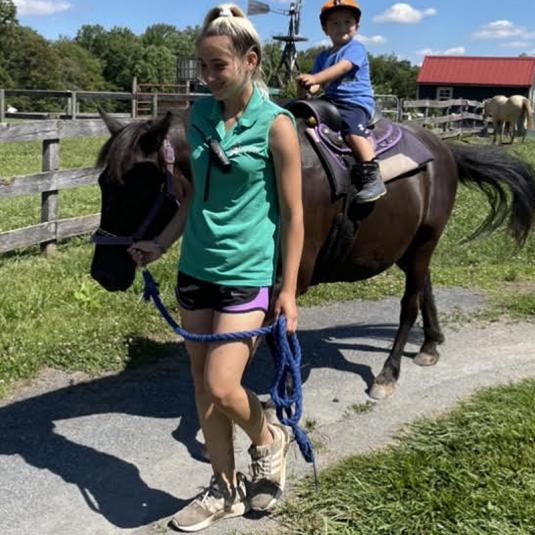 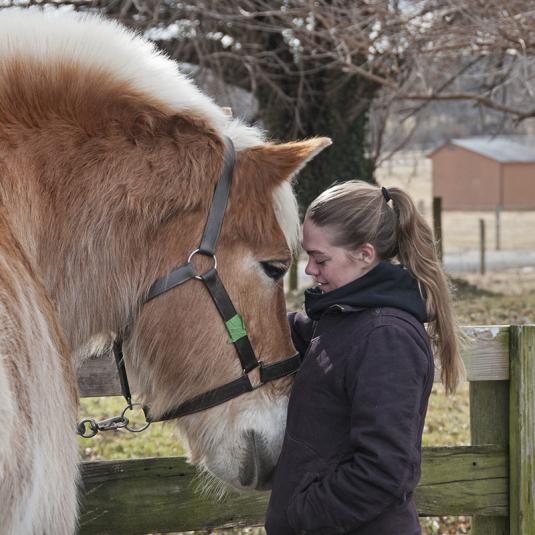 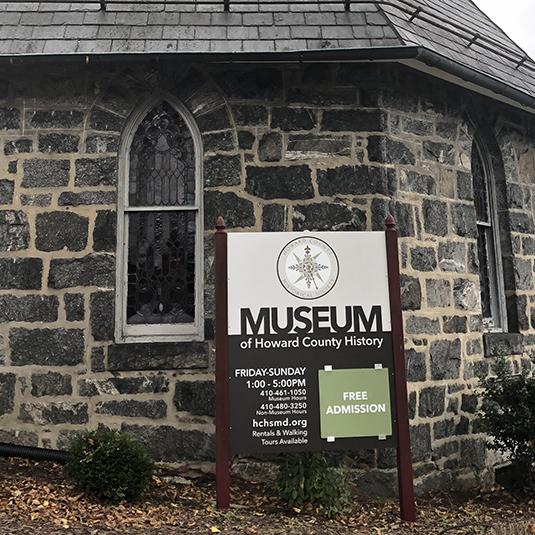 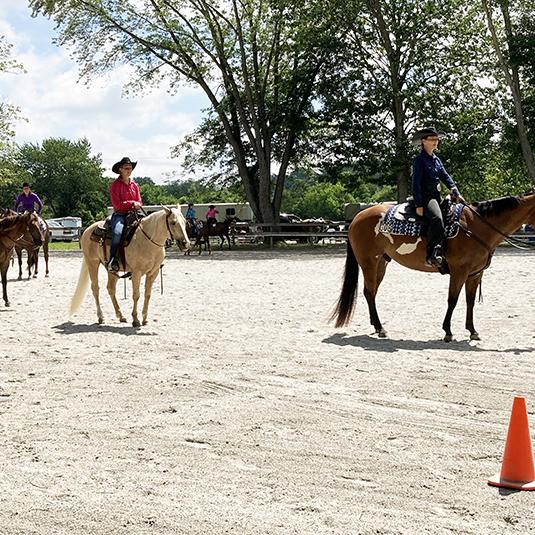 The race meet showcases one of Maryland’s most historic sports, horse racing over the open countryside while jumping over natural fences. Spectators enjoy an outdoor party, vying for “Best Tailgate Awards” while cheering on horses and riders. The Howard County Cup Races have been a tradition for over 70 years. They are held the first Saturday in May and are part of Maryland’s Governor’s Cup Steeplechase Series.
More info...

Established in 1985, the Maryland Horse Council is housed in a historic building in the village of Lisbon and is open for visitors to drop by, pick up a copy of the Council’s monthly magazine The Equiery and have their equine-related questions answered. MHC is the trade association that represents all segments of the Maryland horse industry and educates and represents the state’s diverse horse community. MHC is the industry’s voice in advocating for policies and positions to lawmakers and other public officials. It’s magazine, The Equiery, prides itself on being Maryland’s source for horse information. It is a full color, glossy publication with a large statewide circulation and impressive online presence. The Horse Council center is also headquarters for the Maryland Equine Transition Service (METS), which helps place horses in new homes.

The Baltimore Sun proclaimed the parade “one of the best small-town Christmas parades in Maryland.” It brings together an assortment of farmers driving their tractors and wagons filled with well-wishers along with horseback riders and their mounts from all over the state and surrounding states dressed in holiday garb. The parade raises money for the Howard County Food Bank, Carroll County Food Sunday, Farmers and Hunters Feeding the Hungry and the Lisbon Volunteer Fire Company. The parade is managed by a committee comprised of local farmers and horse people. The committee members bring a variety of interests to the parade, which helps ensure its broad appeal to both participants and spectators. The Equiery, whose home base is in the Maryland Horse Council building, serves as a convenient drop-off location for donations and registrations for the parade.
More info...

Since its founding, Days End Farm Horse Rescue (DEFHR) has gone from a small non-profit sheltering a few horses to a full-scale, well-respected national rescue and rehabilitation facility sheltering 110 to 150 horses annually. All horses come through animal protection agencies across Maryland and surrounding states. After their rehabilitation, the horses are evaluated and provided the training needed to best prepare them for adoption. DEFHR offers a wide variety of educational programs, volunteer opportunities, summer camps, and online resources. DEHFR is a certified Maryland Horse Discovery Center. Visitors are welcome.
More info...

Among the prominent therapeutic riding and horsemanship centers are the Therapeutic & Recreational Riding Center (TRRC) in Glenwood; LeCheval Stable, also in Glenwood; and vR Growth and Learning Center near Sykesville. 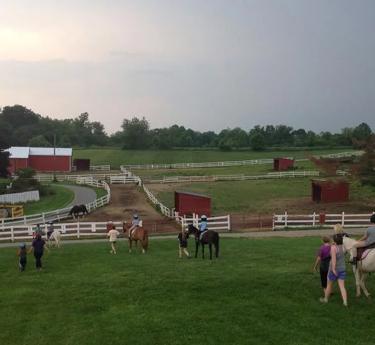 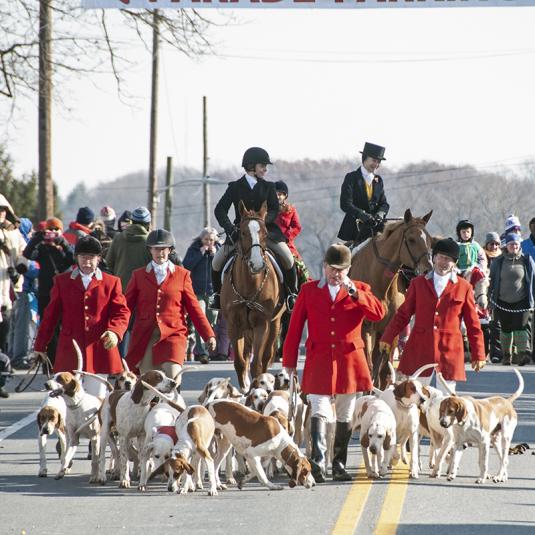 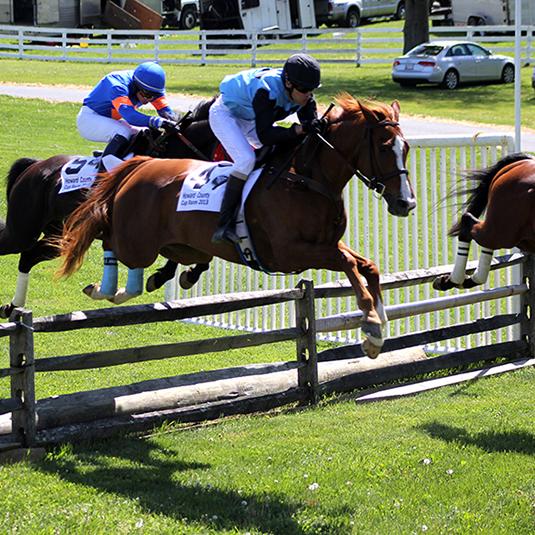 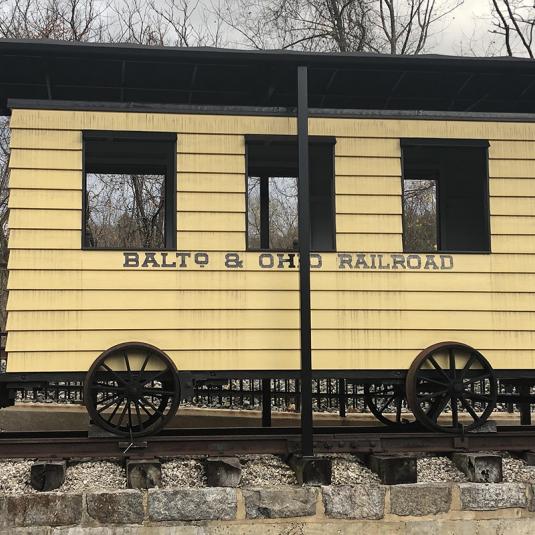 Howard County is home to some of the state’s leading Thoroughbred farms, including Chanceland Farm and Summer Hill Farm in West Friendship, Marama Farm and the Dr. Fred Lewis Farm in Clarksville, Hickory Ridge Farm in Highland and Wellington Park Farm in Lisbon. These are working farms and not open to the public.

Thoroughbred farms from the past--now either developed or used for other equestrian pursuits--include Sunset Hill, Happy Retreat, Walnut Grove, Blarney, Riggs Meadow, Spring Meadow, Longwood, Pistorio Farm, Woodlawn Farm. Each farm was, at one time, home to some of the state’s top racehorses.

The Howard County Hounds, founded in the 1930s and originally headquartered at Burleigh Manor in Ellicott City, merged in 1985 with the Laurel-based Iron Bridge Hounds to become the Howard County-Iron Bridge Hounds. Burleigh Manor is now an animal sanctuary. Although the Howard County Hunt kennels were located in Glenelg for many years, today the property is the site of the Triadelphia Ridge Elementary School and Folly Quarter Middle School.  The hounds are now housed near the village of Long Corner. Fixtures used to include Oakdale, the Warfield family ancestral home, as well as Glenelg Country School, Doughoregan Manor and Folly Quarter Farm, now the site of the University of Maryland animal and crop research farm.

The Kingdon Gould estate, Overlook, near Laurel was also the site of many Iron Bridge Hounds foxchases.

Among the county’s many horse boarding and lesson barns is the Morningside Stables at Columbia Horse Center, founded almost simultaneously with the town of Columbia and still a thriving horse center today. There are about approximately 40 other riding lesson and boarding barns in the county, all available by visiting the Maryland Horse Industry Board website www.mda.maryland.gov/horseboard. Schooley Mill Park in Highland and Patapsco Valley and Patuxent River State Parks are popular with trail riders. Schooley Mill has a schooling ring and a cross country field with jumps. 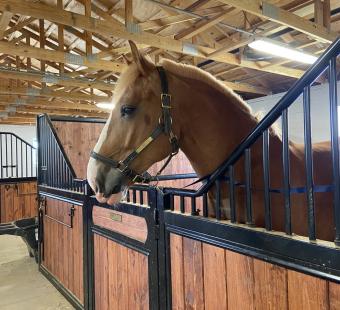 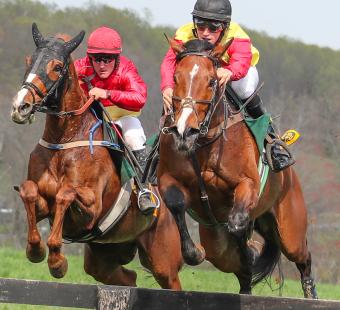 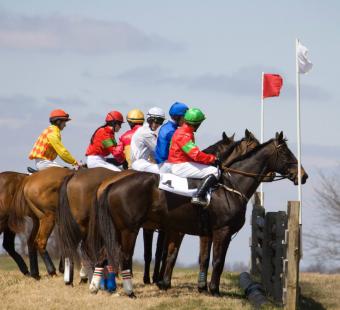 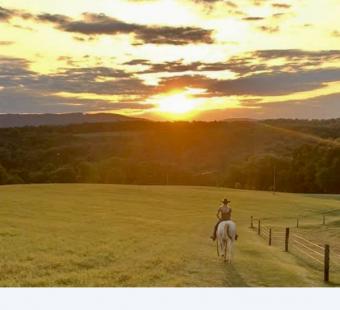 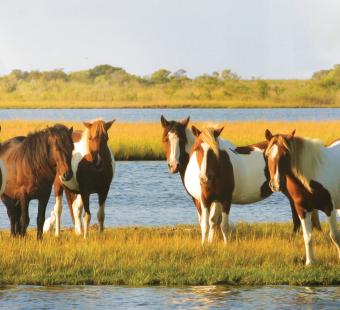 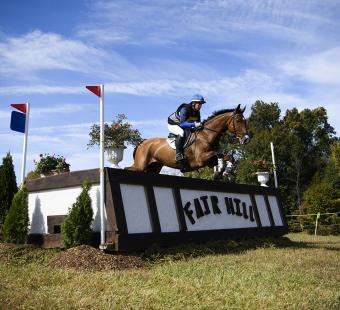 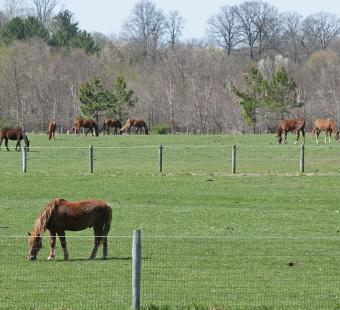 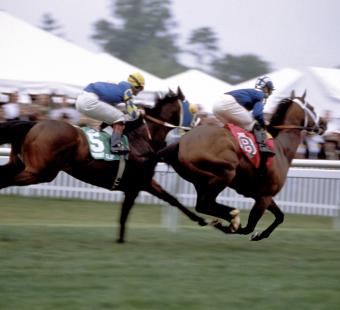 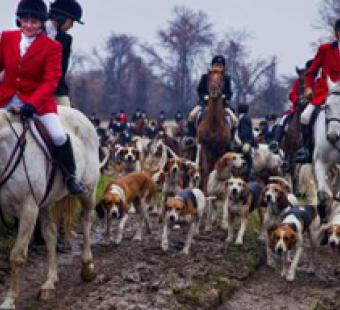