Visitors can explore the powerful history and stories of courage through interpretive materials, tours, attractions, and guides as they visit Maryland’s Network to Freedom sites. The Harriet Tubman Underground Railroad Byway provides visitors with the opportunity to walk in Tubman’s footsteps, while the “Following in His Footsteps: Maryland’s Frederick Douglass Driving Tour” traces Douglass’s story around the state.

“As the nation's first ethnic commission, we are pleased to join Governor Hogan in recognizing the authentic history of the Underground Railroad whereby countless brave men, women, and children enslaved here in Maryland were able to escape to their freedom,” said Rev. Dr. Tamara England Wilson, chair of the Maryland Commission on African American History and Culture. “Their stories which reveal cooperation across racial lines will inspire each of us today to do our part in ensuring that all people enjoy the freedoms that this nation affords.”

For more information and to plan the journey along the Underground Railroad, visit https://www.visitmaryland.org/UGRR. 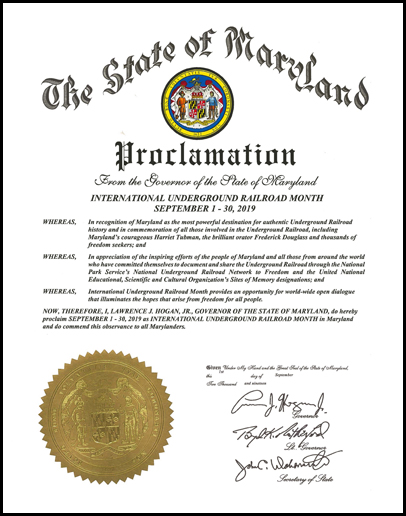 To view a copy of the proclamation, please click here.