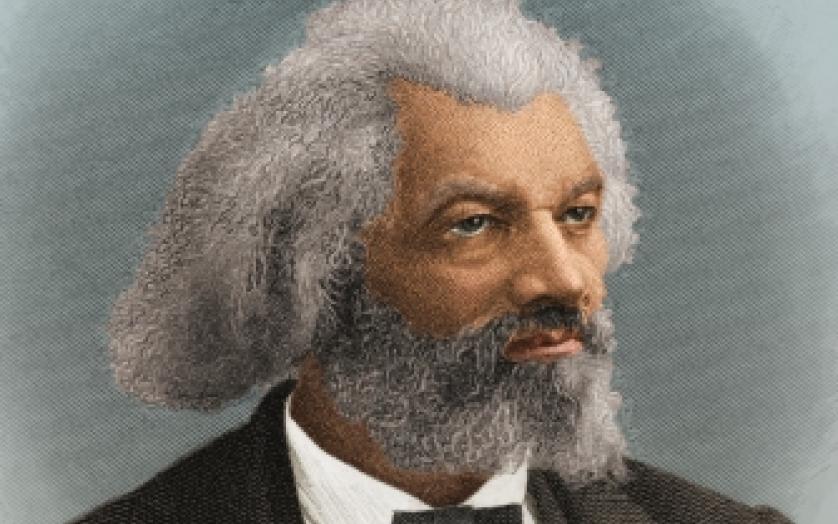 A Timeline of Frederick Douglass’s Life in Maryland and Beyond

August 1824 - Sent to live on Lloyd Plantation, Wye River, at the home of his master, Aaron Anthony.

March 1826 - Sent to live with Hugh Auld family in the Fells Point section of Baltimore.

1827 - Sophia Auld teaches Frederick the alphabet; later he learns to write and do arithmetic on his own initiative.

August, 1834 - Fights with Covey; is not whipped thereafter.

September 17, 1838 - Leaves New York with his wife for New Bedford, Massachusetts, where he will work as a caulker.

May 28, 1845 - Narrative of the Life of Frederick Douglass, an American Slave, published, revealing his identity and presenting a picture of his early life in Talbot County slavery.

August 6, 1845 - Leaves the United States for England, partly to avoid being captured and sent back to slavery and partly to spread the anti-slavery cause in the British Isles.

August 28, 1845 - Arrives at Liverpool on "visit to the home of my paternal ancestors."

September, 1847 - Announces plans to start newspaper, The North Star, despite bitter opposition from Garrison and Phillips, with funds provided by British friends.

December 3, 1847 - First issue of The North Star is published in Rochester, New York, where he makes his home for the next twenty years.

December, 1847 - Meets John Brown in Springfield, Massachusetts. In later discussions with him, is greatly influenced by Brown's personality and insistence that slavery cannot be ended without violence.

May 9, 1851 - Openly breaks with Garrison over issue of political action to end slavery, which Garrison opposes; hence forth the two become bitter enemies.

September, 1851 - Aids three fugitive Maryland slaves, wanted for murdering their former master when he tried to recapture them in Pennsylvania while they were escaping to Canada. The three are among hundreds Douglass helps flee to freedom as "station master" of the Rochester terminus of the Underground Railroad.

July 5, 1852 - Delivers his famous speech, "What to the Slave is the Fourth of July?" in Corinthian Hall, Rochester, New York.

August, 1855 - Publishes second of his autobiographies My Bondage and My Freedom, a more balanced account of his early life than the Narrative.

September 12, 1855 - Attends Liberty Party Convention at Ithaca, New York; nominated for office of Secretary of State of New York, first time such an honor conferred on an American Negro.

October 17, 1859 - Delivers lecture on "Self-Made Men" at Philadelphia; lecture interrupted by news of John Brown's raid at Harpers Ferry; within a week hurries to Canada to evade arrest on charge of being a Brown accomplice.

November 12, 1859 - Sails from Quebec for England, where he stays six months.

August 29, 1860 - Attends radical abolition national convention at Syracuse; chosen one of two presidential electors-at-large; first time a Negro nominated for such a post.

February 24, 1863 - Becomes an agent for the U.S. Government to recruit Negro soldiers into the Union Army.

February – July, 1863 - Travels throughout the North recruiting black troops; sons Lewis and Charles are among first to enlist; both see action with Fifty-fourth Massachusetts Regiment.

August 10, 1863 - Receives pass from President Lincoln enabling him to go safely through the Union lines.

August, 1863 - Ceases publication of Douglass's Monthly, successor to The North Star and Frederick Douglass's Papers, ending fifteen-year career as editor and stating that he is going to the South to recruit Negro soldiers.

November 17, 1864 - Returns to Maryland for first visit in twenty-six years; delivers six lectures in Baltimore; is reunited with sister Eliza whom he has not seen for thirty years. Lectures at Bethel Church, Baltimore “A Friendly Word to Maryland”

1865, April 9 End of the Civil War at Appomattox Courthouse, VA.

October, 1865 - Delivers lecture at inauguration of Douglass Institute, school for Negro children established in his honor in Baltimore.

May, 1869 - Breaks with feminist leaders when they refuse to support ratification of Fifteenth Amendment unless it includes right to vote for all women as well as black men.

May 19, 1870 - Hailed at great ratification of Fifteenth Amendment celebration in Baltimore.

May 11 – 12, 1872 - Nominated for Vice-President of United States on ticket with Victoria C. Woodhull by the Equal Rights Party, but instead campaigns for re-election of Grant.

June 20, 1874 - Tours Annapolis as guest of Thomas H. Young. He visited many “places of interest” including the Senate Chamber inside the Maryland State House. Viewed the painting of George Washington resigning his commission and recited Washington’s resignation speech from memory. Addressed the African American people of the city at a local African Methodist Episcopal Church (Mt. Moriah or Asbury).

March 18, 1877 - Senate confirms his appointment by President Hayes as United States Marshal for the District of Columbia.

November 23-26, 1878 - Visits Easton; there delivers lecture at courthouse; locates site of his birth on Tuckahoe Creek. Stays in the Brick Hotel.

June, 1879 - Bust of Douglass presented to city of Rochester.

March, 1881 - Appointed Recorder of Deeds for the District of Columbia by President Garfield.

February, 1888 - Dedicates remainder of life to struggle for full Negro freedom at surprise birthday party given him by Bethel Literary society in Washington, D.C. on his seventy-first birthday.

September, 1889 - Appointed Charge' d'Affaires for Santo Domingo as well as Minister to Haiti.

March, 1893 - Visits Talbot County for third time amid reports that he plans to buy an estate and spend his final years there. Does not buy.

January, 1894 - Delivers his last great address, "Lessons of the Hour," a powerful burst of his old-time fury against lynch law in the South.

February 20, 1895 - Attends morning sessions of National Council of Women in Washington, D.C.; dies at Cedar Hill in the evening.