Governor Hogan Proclaims 2020 as Year of the Woman in Maryland

ANNAPOLIS, MD – Governor Larry Hogan has proclaimed 2020 as the Year of the Woman in Maryland as the state prepares to celebrate the 100th anniversary of the ratification of the 19th amendment, which gave women the right to vote. Governor Hogan was joined by members of the Governor’s Commission on the Commemoration of the 100th Anniversary of the Passage of the 19th Amendment at The Lightbox Studio in Annapolis. He was joined by Major General (ret.) Linda Singh, the first female Adjutant General of the Maryland National Guard and chair of the Commission.

“Our state’s history has been shaped by extraordinary women leaders, and our administration remains committed to empowering and advocating for women in Maryland,” said Governor Hogan. “I look forward to the many events taking place statewide to commemorate the Year of the Woman. ” 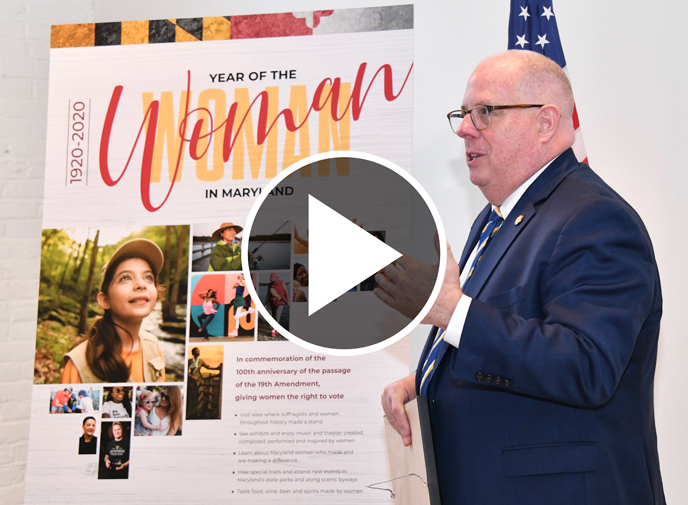 "We are pleased to join Governor Hogan in recognizing both historical and contemporary Maryland women for their myriad contributions to the state and to the nation,” said Major General Singh. “Their stories are told at destinations across Maryland through attractions, special events, curated exhibits and women-centric activities.”

The Commission’s signature event, presented in partnership with Notre Dame of Maryland University and the Women of the World organization, is the WOW Festival on March 7, 2020 at the Columbus Center in Baltimore. Commission is also collaborating with the Maryland Commission for Women to host the 2020 Women’s Centennial Summit on August 26, 2020 at the Lowe House Office Building in Annapolis. The summit, which is free and open to the public, will offer a day of leadership training and development for adult and young women.

In addition, the Maryland Department of Commerce’s Office of Tourism will lead a targeted marketing strategy to highlight attractions, events, activities, trails, exhibits, and experiences that honor women throughout the state.

“The Maryland Office of Tourism has compiled an impressive list of events and activities to be held around the state as we mark this important anniversary and honor the many contributions that women have made in helping to shape the Maryland we know today,” said Maryland Commerce Secretary Kelly M. Schulz.

During Maryland’s Year of the Woman, Maryland residents and visitors will have special opportunities to learn more about notable historic women at attractions throughout the state. A sampling includes:

Year of the Woman events, exhibits and activities include:

For more information and to plan your tour of Maryland, go to https://www.visitmaryland.org/list/2020-year-woman-maryland.