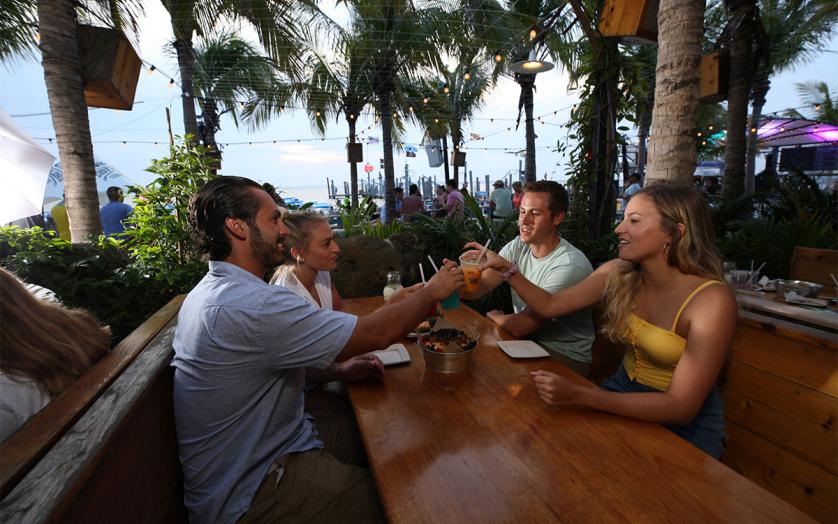 When the sun goes down, after-hours fun in Maryland opens up. From beachside bars on the Eastern Shore to casino excitement in Western Maryland—plus all the live entertainment and local hot spots in between—nightlife options in all areas of the state offer something for everyone.

A good sports bar has plenty of TVs, cold beer flowing from the taps and a lively crowd to cheer on your team. In the Capitol Region, that place is TAP Sports Bar which features 70 flat-screens and a full line-up of seasonal and local brews. If you’re in Baltimore to see a game at Oriole Park at Camden Yards or M&T Bank Stadium, don’t miss Power Plant Live, an open-air entertainment destination. Or, take a swing at the action yourself at Top Golf in National Harbor, which is great for getting a group together, no mulligans.

Something about a killer view just makes a cocktail more satisfying. Take in 360-degree views of National Harbor from the 18th floor at Pose Rooftop Lounge, where you can order top-shelf drinks and dance the night away. In Annapolis, the rooftop bar at Metropolitan Kitchen & Lounge overlooks the city and offers custom cocktails and craft beers. If you’re on the Eastern Shore, there’s no shortage of waterfront watering holes. In Ocean City check out Seacrets, for a Caribbean-inspired atmosphere and strong rum drinks. Two other Maryland beachy bars, that you can visit by land or by boat, are Red Eye’s Dock Bar in Kent Narrows/Grasonville and Vera’s White Sands Beach Club in Lusby.

Enjoy performances from Maryland’s top local talent and major touring acts. Party like it’s 1929 at Bethesda Blues & Jazz Supper Club, which features blues, jazz, orchestral, rock and even burlesque shows in a chic setting. In Annapolis, Rams Head Tavern serves up more than 100 beer selections and live music seven nights a week. Belt out your request on stage with a little added liquid courage at Bobby McKey’s Dueling Piano Bar in National Harbor, a fun night out and bachelorette hot spot. If you’re looking for a laugh, Magooby’s Joke House in Timonium is the place to see nationally recognized comedians.

Casinos in Maryland offer all-night fun—if table games, slots and sports books are your idea of a good time. Live! Casino in Arundel Mills has it all—and all in one place—including gaming, celebrity-helmed restaurants, and live music right in the middle of the casino floor. In Western Maryland, visit Rocky Gap Casino Resort where you can golf by day and gamble by night. The MGM National Harbor is a destination of its own, with high-end retail and restaurants in addition to the casino, massive theater and nightclubs. See the full list of Maryland Casinos here.

Maryland’s brewing history is older than the country itself, so there are plenty of places to indulge. Go to the Flying Dog tasting room in Frederick for a sample of the “Most Maryland Beer Ever,” a gose-style brew made with Old Bay. Try to taste all the flavors of Maryland’s breweries in one place at the Brass Tap Craft Beer Bar in National Harbor, where there are more than 150 beers on tap. True beer aficionados love Evolution Craft Brewing Company & Public House, which features EVO mainline beers, seasonal selections and small batch brews released exclusively on site in Salisbury. There’s also the unforgettable Guinness Open Gate Brewery in Baltimore—the only Guinness brewery outside of Dublin! This snapshot doesn’t begin to tap the keg on all the breweries, wineries and distilleries in Maryland…so check out the full list here.

Nighttime Fun for the Family

Fun for the whole family can still be found after the sun goes down. Stock the car with snacks for a night at Bengies Drive-In Theatre in Middle River, home to the largest movie theater screen in the U.S. Watch the sun set over the majestic Chesapeake on a sunset cruise with Chesapeake City Water Tours or catch dinner and show fit for kings and queens at Medieval Times Dinner and Tournament in Anne Arundel.