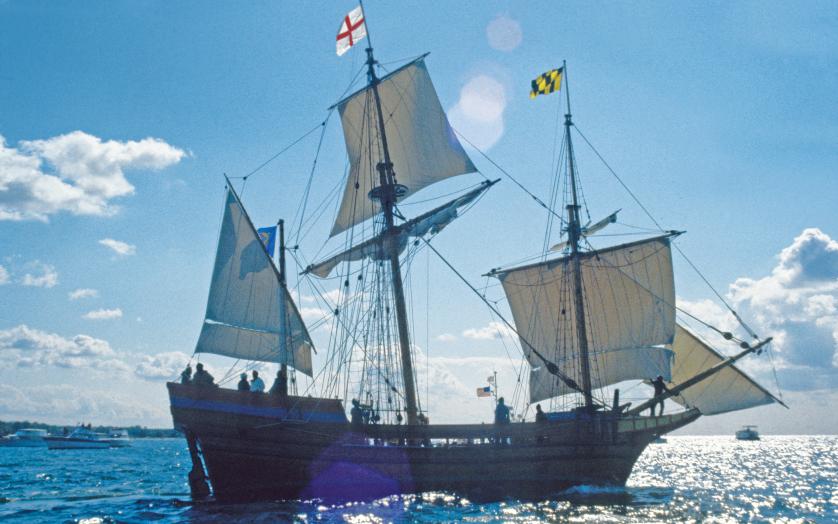 1632 – Maryland Charter granted to Cecilius Calvert by King Charles I

1664 – Slavery allowed by law in Maryland

1695 – Annapolis becomes the capital of Maryland

1784 – George Washington resigned his commission in the State House

1784 – Congress ratifies the Treaty of Paris in the State House, officially recognizing the United States as an independent and sovereign nation.

1788 – Maryland becomes the seventh state to ratify the U. S. Constitution

1806 – The Historic National Road, which will stretch from Maryland to the Ohio River, is commissioned as America’s first federally funded highway. Construction begins in Cumberland five years later.

1826 – Public schools established by law; Jews given right to vote and to hold public office

1833 – The seven-arch Monocacy Aqueduct is completed, becoming the largest structure on the C&O Canal. Measuring more than 500 feet in length, it has survived both hurricanes and Confederate attacks

1838 – Disguised as a sailor, Frederick Douglass boards a train to Havre de Grace and finds freedom from slavery. The Eastern Shore native later gains international fame as an orator and statesman.

1845 – The school that would become the U.S. Naval Academy is established at Fort Severn, Annapolis, with seven professors and 40 midshipmen.

1849 – Destined to write nevermore, Edgar Allan Poe dies while traveling in Baltimore. He is laid to rest at a memorial grave in the Westminster Burying Ground in Baltimore.

1850 – One year after escaping slavery in the Cambridge area, Harriett Tubman becomes a “conductor” on the Underground Railroad and rescues numerous family members and friends.

1862 – Confederate forces defeated at Antietam. Remembered as the “Single Bloodiest Day of the Civil War,” the Battle of Antietam takes place in Sharpsburg, with casualties numbering more than 23,000

1875 – The present-day Thomas Point Shoal Light, one of the most recognizable symbols of Maryland, is completed. It is the Chesapeake Bay’s only screwpile light still in its original location

1895 – Baseball slugger George Herman “Babe” Ruth is born in Baltimore, near the present site of Oriole Park at Camden Yards

1900 – The first passenger train from Washington, D.C., arrives at Chesapeake Beach, a new resort town with a casino and race track. Today, Chesapeake Beach and its sister city, North Beach, are known more for boutiques, eateries and quiet beach fun

1933 – A four-day storm in Ocean City cuts an inlet that becomes a permanent link between the ocean and bay, signaling the dawn of the town’s prominence as a sportfishing center

1952 – The 4.3-mile-long William Preston Lane, Jr., Memorial Bridge (Chesapeake Bay Bridge) opens with dual spans that link the western and eastern shores of the bay. It is among the world’s longest over-water structures

1967 – Alex Haley, Pulitzer Prize-winning author of Roots, pays an emotional visit to the Annapolis City Dock to stand where his ancestor, Kunta Kinte, arrived 200 years earlier on board an African slave ship. A statue of Haley now marks the site.

1978 – James Michener’s epic novel, "Chesapeake", begins its 18-week run on top of the Publisher’s Weekly best-seller list. For two years, Michener lived on the Eastern Shore and feasted on crab cakes while working on his book.

1980 – Baltimore celebrates the grand opening of Harborplace, a shopping, dining and entertainment complex central to the city’s Inner Harbor redevelopment

1988 – “Hairspray,” a film written and directed by Baltimorean John Waters, enjoys critical and popular success upon its release, and is adapted more than a decade later as a Tony Award-winning Broadway musical

1995 – Baseball’s “Iron Man,” Cal Ripken, Jr., takes the field at Oriole Park at Camden Yards and plays in his record-setting 2,131st straight game. The streak reaches 2,632 games before he takes a day off

2001 – The Baltimore Ravens defeat the New York Giants, 34-7, in Super Bowl XXXV. It is one of many national championships won by Baltimore sports teams in football, baseball, indoor soccer and lacrosse

2004 – “Opening Night at the Hippodrome,” highlighted by the Baltimore premier of “The Producers,” marks the rebirth of the 90-year-old theater/performing arts center.

2004 – Swimmer Michael Phelps of Towson becomes the first American to win eight medals (six of which are gold) in a single Olympic Games.

2008 – Michael Phelps wins eight gold medals at the 2008 Beijing Games, Phelps took the record for the most first-place finishes at any single Olympic Games. Five of those victories were in individual events, tying the single Games record.

2012 – Michael Phelps competes in the 2012 Summer Olympics in London, winning four gold and two silver medals, making him the most successful athlete of the Games for the third Olympics in a row.