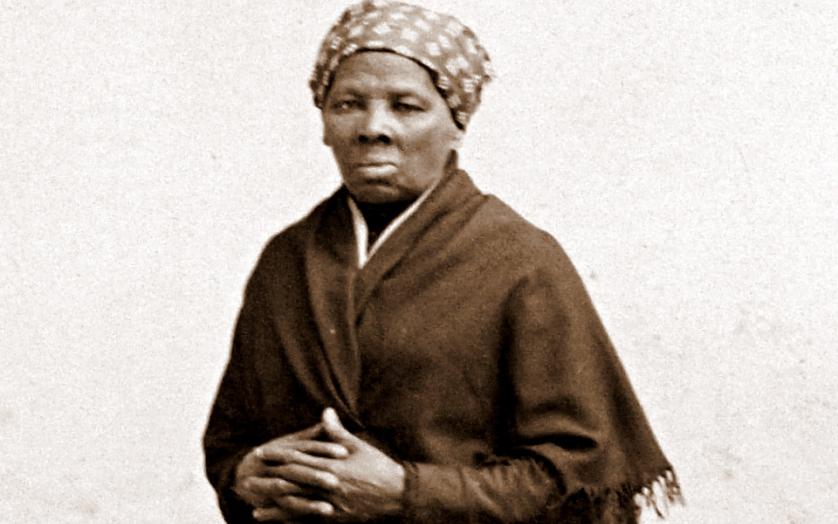 Fact: According to Tubman’s own words, and extensive documentation on her rescue missions, we know that she rescued about 70 people – family and friends – during approximately 13 trips to Maryland. During public and private meetings during 1858 and 1859, Tubman repeatedly told people that she had rescued 50 to 60 people in 8 or 9 trips. This was before her very last mission, in December 1860, when she brought away 7 people. Sarah Bradford exaggerated the numbers in her 1868 biography. Bradford never said that Tubman gave her those numbers, but rather, Bradford estimated the exaggerated number. Other friends who were close to Tubman specifically contradicted those higher numbers. We can just about name every person Tubman helped. In addition to family and friends, Tubman also gave instruction to another 70 or so freedom seekers from the Eastern Shore who found their way to freedom on their own. 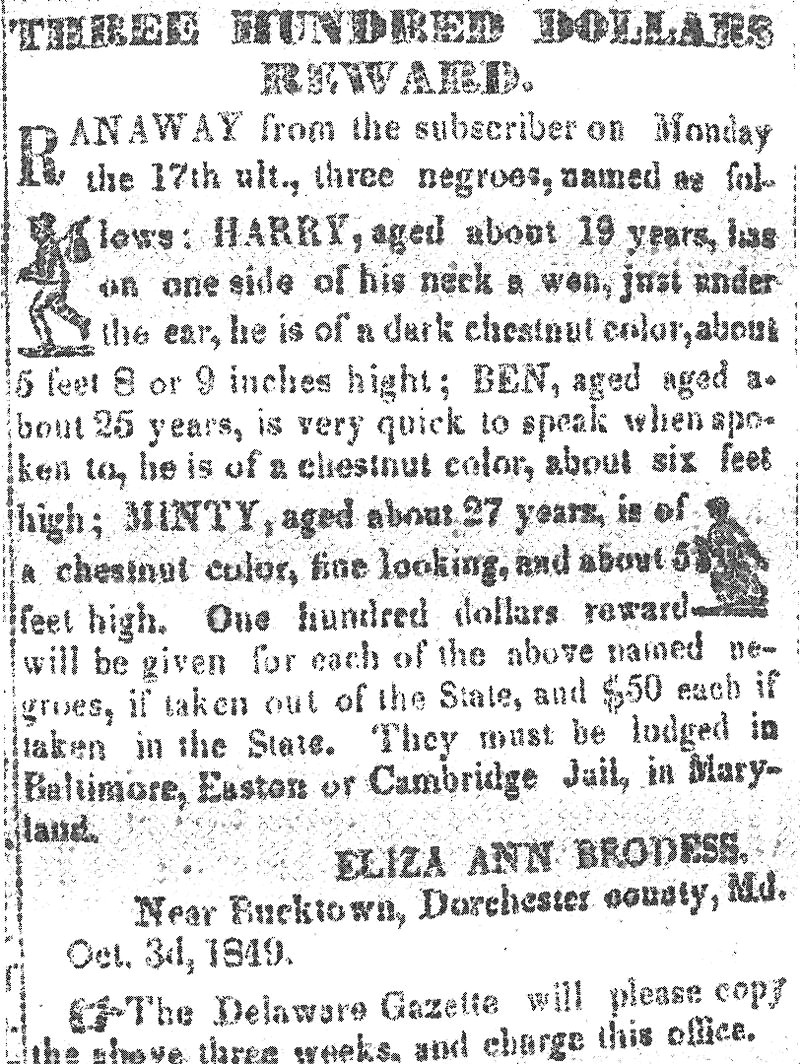 Fact: The only reward for Tubman’s capture is in the October 3, 1849 advertisement for the return of “Minty” and her brothers “Ben” and “Harry,” in which their mistress, Eliza Brodess, offered $100 for each of them if caught outside of Maryland. Slaveholders on the Eastern Shore of Maryland had no idea it was Harriet Tubman (or, Minty Ross, as they knew her) who was helping and inspiring people to run away. The $40,000 bounty figure was made up by Sallie Holley, a former anti-slavery activist in New York, who wrote a letter to a newspaper in 1867, arguing for support for Tubman in her pursuit of back pay and pension from the Union Army. To put this in perspective, the United States government offered $50,000 for the capture of John Wilkes Booth, who murdered President Lincoln in 1865. $40,000 is equivalent to several million today, and for that, she would have been captured, and every newspaper in the nation would have posted that advertisement.

Myth: Harriet Tubman rescued people from all over the south using the Underground Railroad.

Fact: Tubman returned only to Maryland to bring away loved ones – family and friends she could not live without and whom she could trust. It was too dangerous for her to go places where she did not know people or the landscape.

Fact: Harriet Tubman never used the quilt code because the quilt code is a myth. Tubman used various methods and paths to escape slavery and to go back and rescue others. She relied on trustworthy people, black and white, who hid her, told her which way to go, and told her who else she could trust. She used disguises; she walked, rode horses and wagons; sailed on boats; and rode on real trains. She used certain songs to indicate danger or safety. She used letters, written for her by someone else, to trusted individuals like Jacob Jackson, and she used direct communication with people. She bribed people. She followed rivers that snaked northward. She used the stars and other natural phenomenon to lead her north. She also trusted her instincts and faith in God to guide and comfort her during difficult and unfamiliar territory and times.

Myth: Harriet Tubman sang ‘Swing Low, Sweet Chariot,’ and ‘Wade in the Water’ and ‘Follow the Drinking Gourd’ as signals on the Underground Railroad.

Fact: Tubman sang two songs while operating her rescue missions. Both are listed in Sarah Bradford’s biography Scenes in the Life of Harriet Tubman: ‘Go Down Moses,’ and, ‘Bound For the Promised Land.’ Tubman said she changed the tempo of the songs to indicate whether it was safe to come out or not. Follow the Drinking Gourd was first written and performed by the Weavers, a white folk group, in 1947, nearly 100 years after Tubman’s days on the Underground Railroad. Swing Low, Sweet Chariot was written and composed after the Civil War by an Afro-Cherokee Indian living in Oklahoma and therefore would have been unknown to Tubman before the Civil War.

Fact: Harriet Tubman carried a small pistol with her on her rescue missions, mostly for protection from slave catchers, but also to encourage weak-hearted runaways from turning back and risking the safety of the rest of the group. Tubman carried a sharpshooter's rifle during the Civil War.

Fact: Araminta is a centuries old English Puritan name. During Tubman’s time, there were many women, both black and white, in Maryland and other places with the name “Araminta” or “Minty” for short. Harriet Tubman had several relatives who were also named Araminta. Harriet changed her name sometime in the 1840s, possibly after her marriage, or because of a religious conversion. Harriet is her mother’s name and the name of other family members.

Myth: Harriet Tubman was born around 1820 in Bucktown, Dorchester County, Maryland on the farm of Edward Brodess.

Fact: According to the most recent research and oral traditions, Tubman was born in early 1822 on the plantation of Anthony Thompson, Edward Brodess’ stepfather, located south of Madison in an area called Peter’s Neck in Dorchester County. Tubman was later brought to Bucktown, with her mother and siblings, to live on Brodess’ small farm.

Fact: Rit and Ben Ross had nine children together. According to court records in Dorchester County, Maryland, where Tubman was born and raised, Tubman had four brothers--Robert, Ben, Henry, and Moses; and four sisters--Linah, Mariah Ritty, Soph, and Rachel. Tubman also had two nieces who she considered sisters--Kessiah and Harriet Jolley--the daughters of her sister Linah.

Fact:  In Dorchester County, where Tubman was born and raised, half of the African American population was free, and most slaveholders (only a portion of the white population) held less than four enslaved people. It was not the custom on the Eastern Shore of Maryland for slaveholders to force marriages between their enslaved people. John Tubman was a free man from a large free family. He did not have to marry Harriet. He must have loved her though, because to marry her he gave up his rights as a husband and father if they had children together. Any children born to Harriet Tubman would have been the property of Edward Brodess and his heirs, not John Tubman.

Fact: Jacob Jackson, a free black farmer and veterinarian, was Harriet Tubman’s confidante. Tubman had a coded letter written for her in Philadelphia and sent to Jackson in December 1854, instructing him to tell her brothers that she was coming to rescue them and that they needed to be ready to “step aboard” the “Ol’ Ship of Zion.” There is no documentation that he actually sheltered runaways in his home. On the Underground Railroad, Jackson would be referred to as an Underground Railroad “agent.” 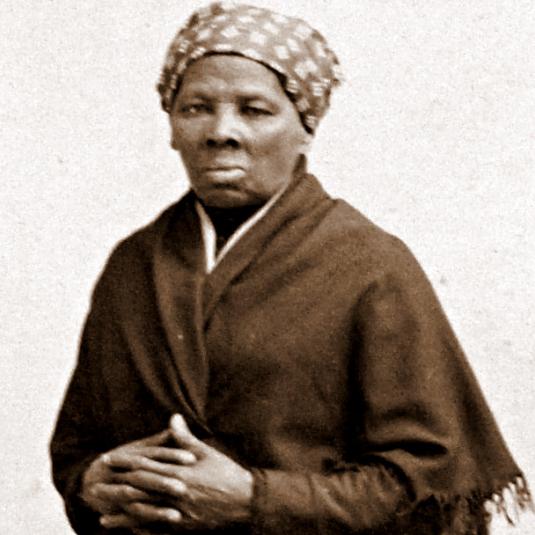