To assist visitors in identifying the authentic Underground Railroad sites and the freedom seekers whose words and deeds have helped shape our state and our nation, the following interpretive materials have been released by the Maryland Department of Commerce Office of Tourism in conjunction with their many federal, state and local partners:

Maryland is the state with the most documented successful escapes on the Underground Railroad – reflected in a robust collection of 81 sites in the National Park Service National Underground Railroad Network to Freedom Program.  Potential new sites are reviewed twice a year so the national program continues to grow, as does Maryland’s listings.

Maryland is the only state in the country to produce a stand-alone Network to Freedom Guide. The printed guide will be distributed at Maryland Welcome Centers, at select Network to Freedom locations, and will be available in pdf format online at www.visitmaryland.org/network-to-freedom. 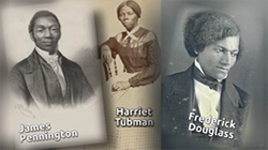 A film, which is nearly nine minutes long and funded in part through the Network to Freedom and produced by Maryland Public Television in conjunction with the Maryland Office of Tourism, highlights some of the most significant Underground Railroad leaders and their inspiring stories as told at 10 key locations. The Network to Freedom film is available for viewing at any of the state Welcome Centers and streams online at www.visitmaryland.org/network-to-freedom.

In 1849, Tubman traveled by night and hid by day, making her way from Maryland through Delaware and into Philadelphia. From September 13-15, several commemorations of the 170th anniversary of Harriet Tubman’s self-liberation are scheduled, a majority on Maryland’s Eastern Shore.

After participating in any of these events, visitors are invited to explore other locations along the scenic byway using the comprehensive guide (available in print and as an audio guide). Much of the marshy landscape, especially near the Blackwater National Wildlife Refuge, appears much as it did to Tubman and her family.

The Maryland section of the Harriet Tubman Underground Railroad Byway is an All-American Road, designated by the U.S. Secretary of Transportation as one of the best scenic driving routes in the country for its national significance.

Published by the Maryland Department of Commerce’s Office of Tourism for more than two decades, this updated guide explores the Maryland African-American experience from the early 1600s to the present.

The travel guides will be widely distributed at state Welcome Centers, local visitor centers, and select museums and attractions. It may be viewed online at www.visitmaryland.org/brochure or a free guide can be mailed by calling 1-800-719-5900.