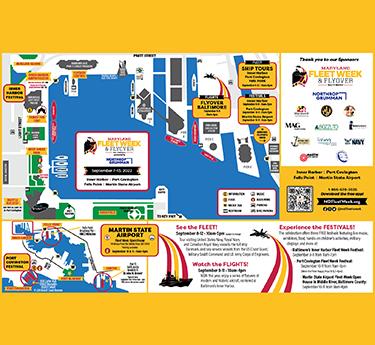 Please click on the link below to view or download the Maryland Fleet Week & Flyover Baltimore Event Map.

The berthing plans for United States and foreign vessels coming to the Inner Harbor, Port Covington, and Fells Point Included in the line-up are hometown favorites such as the USS Constellation, the USS Torsk and others.

Below find the list of ships and where event goers can see them and take tours. Tours aboard the ships are free, open to the public and will take place Thursday, September 8 - Monday, September 12 from 10 a.m. - 5 p.m., unless otherwise noted. (Schedule subject to change)

Inner Harbor
USS Minneapolis Saint-Paul (LCS 21): The US Navy commissioned its newest littoral combat ship USS MINNEAPOLIS-SAINT PAUL on May 21, 2022. She is a fast, agile, mission-focused platform designed for operation in near-shore environments, yet capable of open-ocean operation. She is designed to defeat asymmetric "anti-access" threats and is capable of supporting forward presence, maritime security, sea control, and deterrence. Her ship’s motto is “I will either find a way or make one.” (Free Tour)

Tall Ship Danmark (Denmark): Built in 1933, DANMARK is a steel-hulled, three-masted fully-rigged ship. She serves as a training vessel for young people seeking careers at sea. She is operated by the Maritime Training and Education Centre, MARTEC, in Frederikshavn, Denmark. Besides training in maritime English, engineering, safety, seamanship, firefighting, and maritime techniques, life on board influences the trainees’ ways of thinking and their social skills. (Free Tour)

USS Constellation** (Historic Ships in Baltimore): The USS CONSTELLATION, a National Historic Landmark, is a sloop-of-war, the last sail-only warship designed and built by the United States Navy. She was built in 1854, using a small amount of material salvaged from the frigate USS Constellation, which had been disassembled the year before. (Admission Fee)

US Light Ship Chesapeake/USS Torsk** (Historic Ships in Baltimore): Commissioned for the United States Navy on December 16, 1944, the USS TORSK was the only submarine out of its Tench Class fleet of ten to see service during World War II. Over eighty sailors lived aboard Torsk. After numerous war patrols and duties as a training boat after the war, the TORSK arrived in Baltimore to serve as a museum and
memorial in 1972. (Admission Fee)

USCGC 37**(Historic Ships in Baltimore): The U.S Coast Guard Cutter (USCGC) 37, a National Historic Landmark, is one of the famed Secretary of the Treasury Class Coast Guard cutters built in the mid-1930&#39;s. Commissioned in 1936 as USCGC TANEY, Cutter 37 was designed for law enforcement missions, search and rescue, and maritime patrol. She is notable as the last warship afloat that fought in the attack on Pearl Harbor. (Admission Fee)

USCGC James Rankin (WLM 555): Named after lighthouse keepers, the US Coast Guard commissioned a new “Keeper” class of coastal buoy tenders in the 1990s. With a home port at the nearby Coast Guard Yard in Curtis Bay, her mission includes aids to navigation (ATON) support for the Chesapeake Region. Each spring she deploys the star-spangled Francis Scott Key buoy, marking the general area where British forces commenced bombardment of Fort McHenry during the War of 1812. (Free Tour)

USNA Yard Patrol Craft (YP): The mission of the Midshipmen-run Yard Patrol Squadron (YPRON) is to provide the Brigade opportunities to enhance their leadership, seamanship and navigation skills in a safe and controlled learning environment that mimics that of the Fleet. Midshipman crews practice onboard Yard Patrol Craft (YPs) and execute out-of-area movement orders to ports on the Eastern Seaboard. (Free Tour)

Port Covington
USS Carter Hall (LSD 50): Classified as a Dock Landing Ship, CARTER HALL’s mission is to transport Marine personnel, landing craft, vehicles, and cargo; land them ashore using landing craft and helicopters in support of military and humanitarian assistance operations; and support and withdraw them as necessary. She acts as an invaluable component to a joint Navy-Marine expeditionary unit (ARG/MEU), one of which is forward deployed at all times to quickly respond to any potential developing crisis. (Free
Tour. Not available Friday, September 9)

USACE Reynolds: The REYNOLDS is a steel debris vessel named after John Reynolds, a former Chief of Operations for the Baltimore District, Corps of Engineers. Built in 1992 in Pensacola FL, she patrols the waters of the Baltimore Harbor and Patapsco River for debris that could be hazardous to navigation. Equipped with a hydraulic front-end loader with a mesh basket, her crew can pick debris directly out of
the water. In support of the USACE Clean Energy Initiative, she runs on B-99 bio-diesel. (Free Tour)

USACE Catlett: CATLETT is 61-foot survey vessel christened into the fleet in 2017 and named after former hydrographic surveyor Harold Catlett. She actively supports the Baltimore District’s Navigation Branch Operations in construction and maintenance of over 100 Federal navigation projects on the Chesapeake Bay and its tributaries, including a deep draft survey mission in a 50-foot main shipping channel. (Free Tour)

USAAF P-520 Crash Rescue: United States Army Air Force Crash boats (USAAF) were
a class of wooden hulled boats ranging in size from 63 feet to 104 feet. Their mission?
Find and recover downed airman who had to ditch their plane over the sea.

Fells Point
HMCS Moncton (M708, Canada) - A Kingston-class coastal defense vessel that has
served in the Canadian Forces since 1998. MONCTON is the ninth ship of her class.
She is the second vessel to use the designation Moncton. The ship is assigned to
Maritime Forces Atlantic (MARLANT) and is homeported at Halifax, Nova Scotia,
Canada. (Free Tour)

** Fees for touring of these vessels. www.historicships.org. 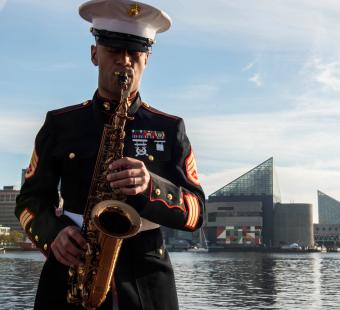 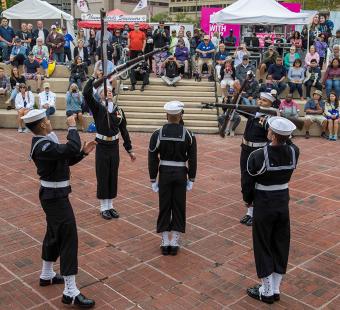 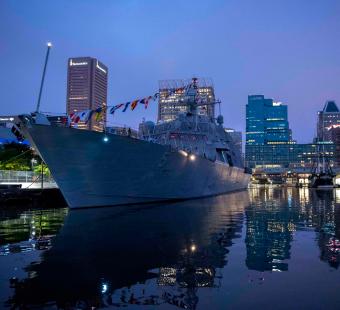 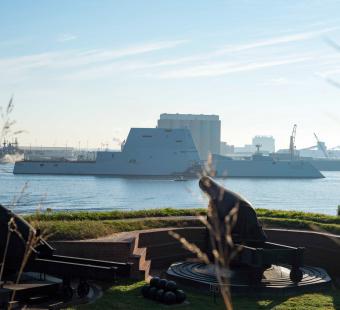