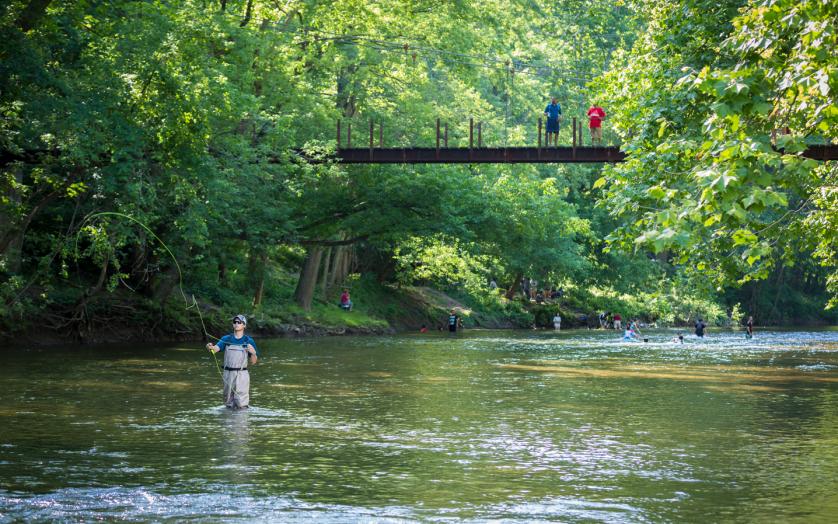 Out and About in Maryland's Backyard

A fisherman’s haven, a cyclist’s dream and natural wonders just waiting to be discovered carve out the backroads and shores of Maryland’s great outdoors.

From the western mountains to the beaches of the Eastern Shore, Maryland is home to a host of opportunities for outdoor recreation—whether it’s a lazy day of fishing or a more energetic pursuit. Cast for rockfish in the bay, bike through winding mountains along the Western Maryland Rail Trail and explore natural wonders from rocky cliffs to sandy Atlantic shores.

By day, the beaches of Ocean City are filled with families out for the summer sun, but as the evening begins, you can see a daily shift change as a different crowd descends on the beaches with rods cast into the surf. The Susquehanna Flats is a popular spot in rockfish season, and there are plenty of local guides to advise you. Just north of Baltimore is a wild trout stream, the Gunpowder, with deep pools and long gravel runs.

The boundary line between Maryland and Virginia along the Potomac is one of the state’s best recreational fishing spots. Fishermen report catching striped, largemouth and smallmouth bass, as well as shad and the terrifying, yet fun-to-catch invasive snakehead fish. Deep Creek Lake, with waters flowing all the way to the Mississippi, is known for its bass fishing, and allows outboards. This lake is the place to catch yellow perch, walleye and occasional northern pike.

ROLLING DOWN THE BACKROADS

From the 185-mile C&O Canal Towpath bike trail along the Potomac River to the 1.4-mile boardwalk cruise along the Chesapeake Beach Rail Trail, there are bike trips for every endurance level. The Great Allegheny Passage and the C&O Canal Towpath come together in historic Cumberland. Both are easily accessible via Amtrak, since Western Maryland was built by the railroad, which services surrounding cities on the route and makes it easy to bring a bike along. For towpath cyclists interested in more than a day trip, there are rustic campsites or canal lock houses every five miles along the trail. Near Baltimore, the Torrey C. Brown Rail Trail follows 19.7 miles of the former Northern Central Railway (NCR) through Ashland, Phoenix, White Hall, Bentley Springs and Freeland, with a restored rail house along the way in Monkton. Further east, the Cross Island Trail runs across Kent Island, starting at the eastern end of the Bay Bridge and featuring stunning Chesapeake Bay views from a wide paved trail. Across the Eastern Bay, take in the waterfront from Talbot County’s Chesapeake Views Trail, one of a series of thematic bicycle rides laid out around St. Michaels. The Chesapeake Beach Railway Trail isn’t as long as its western cousins, but it packs a lot of Southern Maryland sightseeing into a 1.4-mile boardwalk along the former Chesapeake Railway, and joins other small rail trails to cross Anne Arundel, Calvert and part of Prince George’s counties. The Western Maryland Rail Trail is another great bike route that parallels the C&O, connecting to the Great Allegheny Passage at several points on its 22-mile run along the Potomac River between Fort Frederick State Park and Sideling Hill.

Rocks State Park was formed specifically to protect its majestic rock formation, rising 190 feet over Deer Creek. The King and Queen Seat is reachable by a 1.5-mile hike, and it’s also popular with climbers. For a different kind of day at the beach, check out Calvert Cliffs State Park, a remnant of a prehistoric time when Maryland was covered by water. The receding sea left these cliffs, and the beach at the base of them is a fossilhunter’s paradise.

A short hike through the woods off the C&O Towpath will get you to an incredible panoramic expanse of Harpers Ferry across the Potomac River from Weverton Cliffs.

The unique environment of Assateague Island provides a home for more than 320 bird species and is a popular getaway for beach-goers looking for a more undeveloped day at the beach, but the island is most known for its population of wild horses. Maryland’s greatest natural wonder and the one that gives the state its most distinctive characteristics is the Chesapeake Bay. The bay is an ecological marvel, running from fresh water at the head to saltwater where it intersects with the Atlantic Ocean. 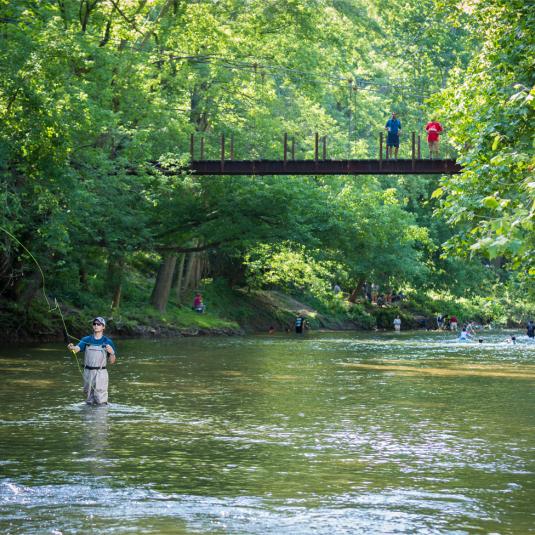 Patapsco Valley State Park is a wooded oasis along the Patapsco River between Ellicott City and Elkridge. 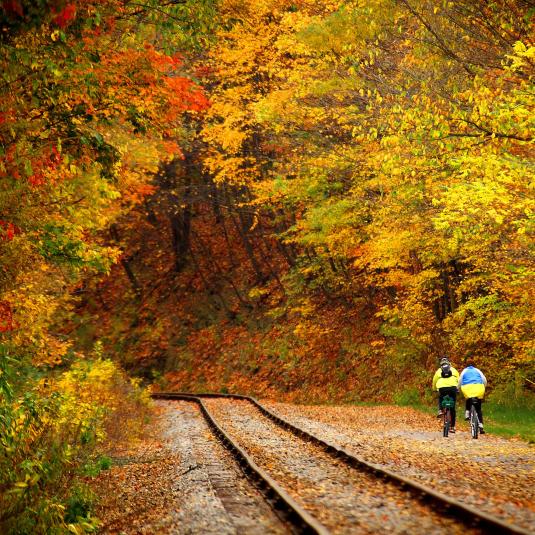