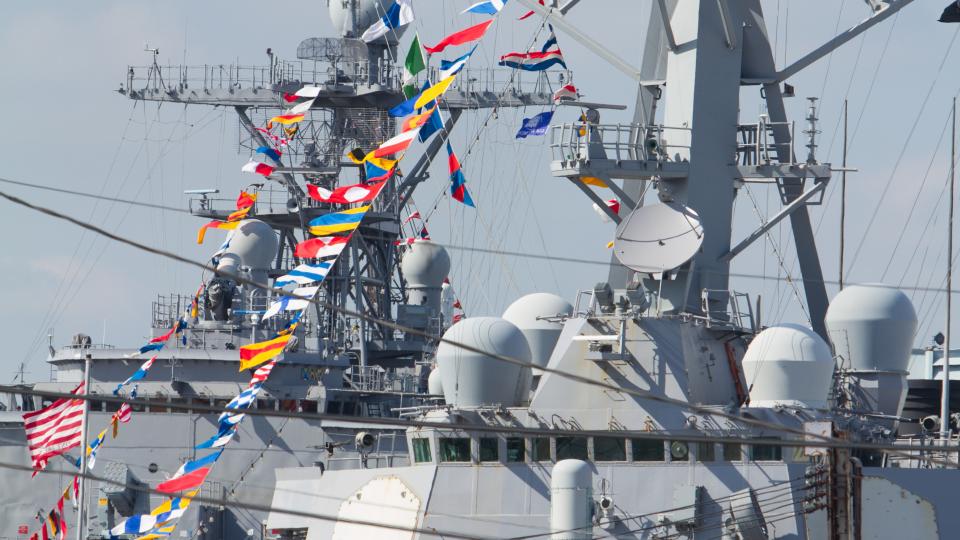 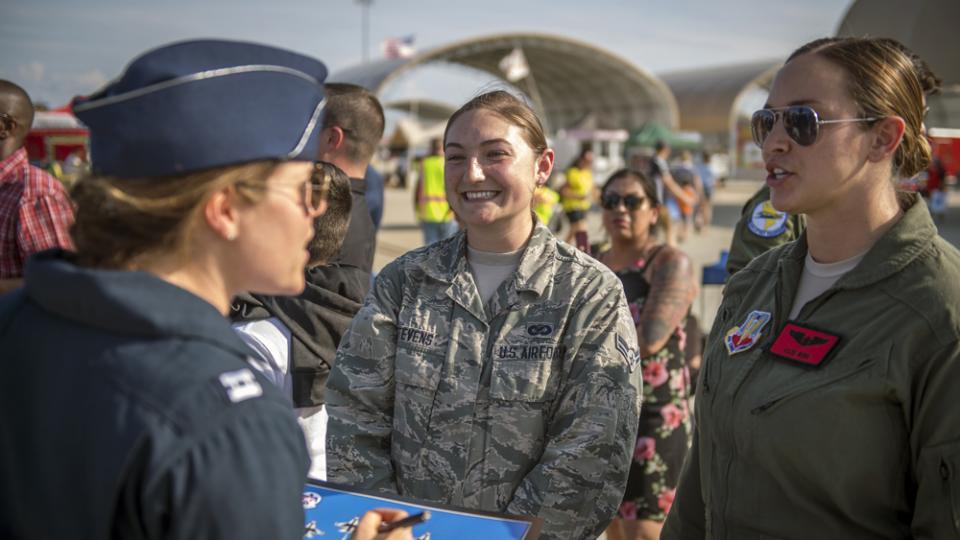 Baltimore, MD (May 31,2018) - Enjoy the fleet, the flights and the festivals when Maryland Fleet Week & Air Show Baltimore 2018 returns October 3-9 2018 to the Inner Harbor, Locust Point, Fort McHenry, Fells Point and Martin State Airport. This weeklong celebration of the rich maritime traditions of the Chesapeake Bay and the contributions of Marylanders to the defense of the nation is presented by Historic Ships in Baltimore in partnership with the United States Navy, United States Air Force, the Maryland State Department of Commerce, Office of Tourism Development and the City of Baltimore, among others. The 2018 title sponsor for Fleet Week is Northrop Grumman Mission Systems which joins many additional sponsors and other participating partner organizations in supporting this event including Visit Baltimore, Waterfront Partnership, Sail Baltimore, Baltimore Office of Promotion & the Arts and Downtown Partnership.

This free, family-friendly event will include tours of United States, Canadian and British naval ships, a spectacular air show featuring the United States Air Force (USAF) Thunderbirds and other performers, the Fleet Week Festival at the Inner Harbor, various educational and community oriented activities, an Open House at Martin State Airport in Baltimore County and, NEW to the event this year, a 5K Run. For more information, log onto www.mdfleetweek.com, connect on social media channels through Facebook, Twitter or Instagram or call 866- 639-3526.

“Following the great successes of Maryland War of 1812 Bicentennial commemorations in 2012 and 2014 as well as the Fleet Week and Air Show 2016, we are excited to welcome the US Navy, US Air Force and our Allied Partners to Baltimore as we celebrate our maritime heritage and engage families, young people, visitors, businesses and residents alike in a spectacular event. As in 2016, Baltimore has been chosen by the Navy to be one of a select cities to be an official Fleet Week destination so we are excited to highlight assets such as the Inner Harbor and the many historic attractions that are part of the fabric of our wonderful city,” said Chris Rowsom, executive director, Historic Ships in Baltimore.

“As Maryland’s largest aerospace and defense employer, we love inspiring future sailors, engineers and dreamers to think big,” said Jeff Palombo, vice president, Business Development at Northrop Grumman. “Fleet Week is a perfect opportunity to honor our nation’s military and unlock the imagination of our local families and friends, while paying homage to the state’s deep cultural and historical maritime connections.”

In 2016, the last time the Fleet Week & Air Show came to the area, it drew more than 300,000 visitors and residents to the city and the state and resulted in a total economic impact to the city’s business volume of $27.88 million.

FLEET:
October 4-8 (1-6pm) – More than a dozen ships will participate in Maryland Fleet Week & Air Show Baltimore, including U.S. Navy and Coast Guard, Canadian and British Naval ships as well as sea service vessels and traditional sailing ships. They will be open for tours at the Inner Harbor, Fells Point, Canton and Locust Point.

FLIGHTS:
October 6 & 7 (12-4pm) – Attendees will be able to view the most exceptional and expansive air show in the skies over Fort McHenry and Middle Branch! The USAF Thunderbirds will headline the event with flying demonstrations from the F-16 Fighting Falcon. Other performances will include the Canadian F-18 demo, the GEICO Skytypers (a flight squadron of six vintage WWII aircraft), a salute to the hometown team with the USAF A10 Demo Group, Scott Francis (with his flying and daring MXS maneuvers) and much more. (Please note that performers, attractions and static displays are subject to change without notice due to many reasons and may include maintenance, weather or other circumstances)

FESTIVALS:
FLEET WEEK FESTIVAL- October 5-7 (Friday and Saturday 11am-6pm, Sunday 11am-4pm) – This year, the Fleet Week Festival will expand, stretching from Rash Field and the Maryland Science Center around the promenade to the National Aquarium, filling the Inner Harbor with exhibitors and vendors from maritime, military, cultural, and historical organizations. There will be hands-on activities, local food and drink, musical acts, and other entertainers!

MARTIN STATE AIRPORT OPEN HOUSE- October 6 & 7 (10am-5pm) – Once again, Baltimore County will participate in Maryland Fleet Week & Air Show Baltimore with an open house and festival at Martin State Airport and Glenn L. Martin Museum that includes meet and greet sessions with the pilots, displays of military aircraft, musical entertainment, souvenirs and food vendors. At this location, visitors will be able to watch airshow aviators take off and land.

EDUCATIONAL EXPERIENCES AND COMMUNITY OUTREACH:
October 3-9 (times vary)-Throughout the week, thousands of students will experience a variety of educational programs and activities with the U.S., Canadian, and British Navies as well as the Thunderbirds at area parks, schools and other sites. They will have an opportunity to tour ships, participate in “Navigate the Fleet Day,” and also the “Salute to Schooners” event. In addition, Navy sailors will engage in community projects such as a shoreline cleanup at Living Classrooms’ Masonville Cove Environmental Education Center, a field day event with local high schoolers and a special Young Athletes Program (YAP), an initiative to introduce young kids to basic sports and teamwork skills.

WHAT’S NEW!!! FLEET WEEK 5K RACE:
Sunday, October 7 (8am)- NEW to the event will be the Fleet Week 5K Race to benefit Historic Ships in Baltimore. More than 200 sailors and 1,000 local runners will participate in a 5K Race that wraps around the Inner Harbor on Sunday morning.

ABOUT HISTORIC SHIPS IN BALTIMORE
Located in the heart of Baltimore's Inner Harbor, Historic Ships in Baltimore is the steward of two historic U.S. Navy vessels: the US Sloop-of-War CONSTELLATION and the US submarine TORSK. CONSTELLATION is the last all-sail warship built by the U.S. Navy and has an historic provenance dating back to the 1797 frigate CONSTELLATION built in Baltimore. USS TORSK, a WWII era Tench class "fleet boat" submarine, sank the last two Japanese enemy combatants and holds the record for the most dives of any US submarine. Also under the care of Historic Ships are the US Coast Guard Cutter TANEY, the last ship still afloat to witness the Japanese attack on Pearl Harbor, Lightship 116 Chesapeake, which marked the entrance to the Chesapeake and Delaware Bays, and the Seven Foot Knoll Lighthouse, built in 1856 to mark the entrance to the Patapsco River and Baltimore Harbor. As significant symbols of our nation's maritime heritage, the non-profit organization plays a key role in the heritage and cultural landscape within the City of Baltimore and strives to raise awareness throughout Maryland and the United States of these important elements of our nation's history. For more information, visit www.historicships.org.

Historic Ships in Baltimore is a program of the Living Classrooms Foundation, which has its roots in the maritime heritage of the Chesapeake Bay. For more than 30 years, Living Classrooms has been providing hands-on maritime and environmental education programming for Baltimore area youth and adults. For more information, visit www.livingclassrooms.org.

ABOUT THE UNITED STATES NAVY AND MARINE CORPS TEAM
The Department of the Navy recruits, trains, equips, and organizes to deliver combat ready Naval forces to win conflicts and wars while maintaining national security and deterrence through sustained forward presence. The U.S. Navy and Marine Corps Team are deployed around the world during peacetime and during conflicts. The Navy and Marine Corps team also supports humanitarian assistance and disaster relief efforts. Forward presence allows the U.S. Navy and Marine Corps team to do what needs to be done, when called upon to do it. The service members participating in the Maryland Fleet week are warfighters first who train to be ready to operate forward to preserve peace, protect commerce, and deter aggression.

ABOUT MARYLAND TOURISM
The Maryland Office of Tourism is an agency of the Division of Tourism, Film and the Arts within the Maryland Department of Commerce. Visitors to the state spent $17.3 billion on travel-related expenses in 2016. The Maryland tourism industry also generated $2.35 billion in state and local taxes, and provided Marylanders with more than 146,000 jobs with a payroll of $6 billion. For more information, visit www.visitmaryland.org.

ABOUT VISIT BALTIMORE Visit Baltimore is the official sales and marketing organization for Baltimore that generates economic benefits for stakeholders through the attraction of convention, group and leisure visitors. For more information, please visit www.baltimore.org.